We are often asked if clients can submit several samples at once for sequencing and then use one of the samples as a reference genome to compare against the remaining samples.  For example, clients may have a single control sample and several treatment samples and would like to use the control as a reference sequence for the treatment samples.  In general, this is not feasible on short-read instruments alone like our Illumina MiniSeq, but can be possible using the hybrid assembly of short and long-read sequencing. 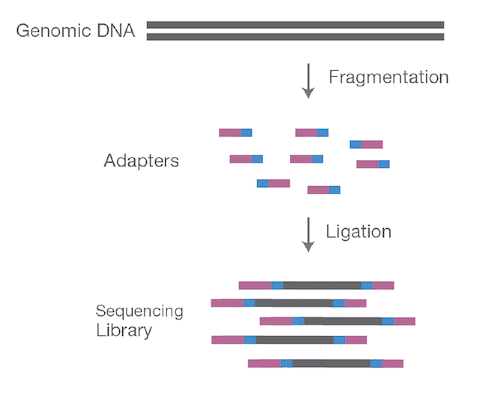 During the library preparation process on short-read instruments, intact genomic DNA is (enzymatically or mechanically) sheared into millions of short pieces.  As shown in Fig. 1, full-length intact genomic DNA is fragmented into several million short fragments (called “reads”), with each read typically about 150 base pairs (bp) in length.  Every sequenced sample is fragmented into millions of reads in this fashion.  The fragmented sample libraries are then sequenced on an Illumina short-read sequencer.  When sequencing runs are finished, each sample still contains several million 150 bp short-reads.

Aligning to a Reference Genome

Aligning Against Mullions of Reads

In contrast, one generally cannot substitute fragmented sequenced samples for intact reference genomes.  If one attempts to align a sequenced sample against another, they are in effect aligning several million short-reads from one sample against several million short-reads from another sample, which yields a very large, exponential number of very short alignments.  Basically, the result is a chaotic mess.  Thus, in our control-treatment scenario, one cannot arbitrarily choose one sequenced sample as a control and align the remaining treatment samples to it, as they would be aligning millions of reads in each treatment sample against millions of reads in the control sample.  Therefore, it is usually recommended that sequenced samples be aligned to known reference genomes as deposited in standard databases like NCBI.

In order to get a full genome, it’s generally necessary to use both short-read and long-read instruments and perform a hybrid assembly with those two results.  Then, gap filling, scaffolding, and reference genome assembly tools are typically needed in conjunction with manual annotation to complete the genome.  We offer long-read sequencing services for hybrid assembly.  The resulting complete genome can then be used as a reference genome.